Jamnagar, the Royal City, Also Has An Abundance of Tourist Attractions. Each city has its unique attractions and so does Jamnagar, the royal city with its sight-seeing spots, temples and a royal palace
Jamnagar, the city of Royals, owes a lot to Maharaja Kumar Shri Ranjitsinhji. He made the city famous with his cricketing skills and, at the same time, contributed a lot to its development. One of his contributions is the Ranjitsagar Dam, a source of water supply to the city. This has become a major tourist attraction in its own right. Apart from the Dam there is plenty to do and see in this city. It is home to the one and only Ayurvedic University. It is home to palaces and temples and not far from here you will find the Marine National Park. There is never a dull moment and a day may be too short to take in all the sights Jamnagar offers. 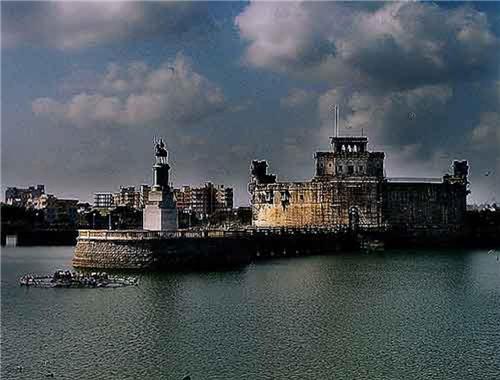 Here follows a methodical listing of the tourist spots in Jamnagar:

You can start with the Lakhota Palace with the Ranmal lake surrounding it. The Palace is on an island in the middle of this lake and was home to the Maharajas of Nawanagar as Jamnagar was called in those days. The Palace has since been converted into a museum housing sculptures, pottery and other ancient artifacts. You reach this Palace over an ornate stone bridge. The entire palace is built of intricately carved stone. The gateway itself is impressive with carvings at the upper level and walls bear frescoes depicting past battles. The Ranmal Lake is well maintained and the whole scene brings back memories of a once glorious era. Read More..........
Address:
Lakhota Palace
Government Colony
Jamnagar, Gujarat 361005

At Kotha Bastion you come across a unique old well. To draw water from the well you do not lower a bucket at the end of a rope. You blow into a small hole in the floor and water comes out. Read More........
Address:
Kotha Bastion
Ranmal Lake
Jamnagar

The Solarium was built by Doctor Jean Saidman, a Frenchman, under the instructions of Maharaja Kumar Shri Ranjit Sinhji. The purpose was to provide an area to treat patients with solar rays and cure them of their ailments such as skin diseases and rheumatism.
Address:
The Solarium
Indradeep Society
Jamnagar

The Khijadiya Bird Sanctuary is only 12 km from Srinagar, accessible by road. It covers 6 square kilometers and is unique in that it has fresh water bodies on one side and salt water marshes on the other side of a bund across the River Ruparel. There are over 300 species of birds to be found here. You could spend almost the whole day exploring this vast sanctuary. Read More..........
Location:
Sachana
Gujarat 361120
Phone: 0288 267 9357

The Bardar Sanctuary is about 16 km southwards and is a hilly region with ancient temples and remnants of an ancient town.
Location:
Bardar Sanctuary
16 kms. South of Jamnagar
Jamnagar
Gujarat

A visit to Jamnagar is incomplete without visiting Darbargadh, the  original palace of the Jam Sahibs who ruled over Jamnagar. The Palace is a marvelous mix of European and Indian architectural styles. The Jams of Jamnagar were noted for their public service works of which Wellingdon Crescent and Chelmsford Market in front of Darbargadh were the outcome of active involvement by Maharaja Kumar Shri Ranjit Sinhji. The Pratap Vilas Palace is the jewel of his creations with European and Indian architecture, most notable of which are the domes, three of which are of glass. Read More.........

To round off your trip, pass by Bhujio Kotho alongside Lakhota tank and admire the fortifications built to repulse invaders. The Bohra Hajira is another place you may want to have a look at. While the Marine National Park and Khijadia Bird Park are not far off, you could find the city based attractions enough to make you linger for quite a while.