Jamnagar was once known as Nawanagar, the royal city built by Jam Rava Jadeja circa 1450 AD. The Jams originally built Darbargarh, the seat of their power and their rule extended down to South Gujarat and they also maintained friendly ties with the kings of Rajasthan. Darbargarh, the original palace and fort, is a magnificent example of old architecture and is today a museum displaying various artifacts, some of them dating back to the 8th century. The city became famous as its scion, Maharaja Ranjit Sinhji, proved his prowess with the bat and endeared himself to the world’s cricket lovers, putting Jamnagar firmly on the world cricket map. Maharaja Ranjit Sinhji was also a philanthropist, responsible for execution of public works. He also oversaw construction of the Pratap Vilas Palace, undoubtedly the finest in all of Saurashtra. 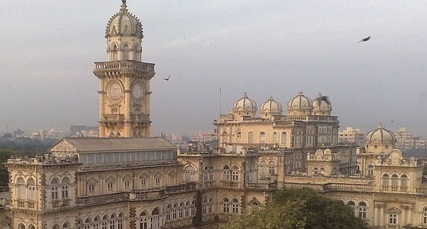 Jamnagar today is a bustling, growing city. On the one hand you have established brass industries and on the other there are oil refineries set up by Essar and Reliance, leading to an influx of business visitors. However, Jamnagar is visited by a large number of tourists arriving here to visit the coastal beaches, the natural parks and the attractions inside the city. The Pratap Vilas Palace is one of the chief attractions. Though not open to the public, permission can be obtained from Darbargarh Palace to visit this palace and even then you may not have access to all areas inside the Palace.

Maharaja Kumar Ranjit Sinhji oversaw construction of the Pratap Vilas Palace. The construction work took several years to complete, stretching from 1907 to 1915. The Palace was constructed according to Indo-Saracenic architecture styles overlaid with European architecture inspirations, reminiscent of the Vicitoria Memorial Building in Kolkata. The three domes are the chief attraction here. These domes are made of glass while carvings of natural flora and fauna adorn the supporting pillars and walls. The domes are typically Indian style architecture. The Palace sits in the middle of spacious grounds and a park that was converted into a Natural Park in 1968 by Maharaja Kumar Ranjit Sinhji.

The Maharaja was born in Jambungalow Palace and lived there until his death. Walking through the magnificent Pratap Vilas Palace one can get an impression of the great wealth, grandeur and pomp of that period.