Jamnagar is a city in western Gujarat popularly known as the ‘Oil City of India’. Jamnagar (formerly Nawanagar) was previously the capital of the princely state of Nawanagar. Today, more than 500 years later Jamnagar presents a unique blend of traditional culture and modern technology.

Jamnagar was founded in 1540 AD by Jam Rava Jadeja and was among the important provinces ruled by the Jadeja clan. Historians trace the origins of Jamnagar back to the ancient times when Lord Krishna and his descendants, the Yadavas built their kingdom in modern day Gujarat. It is believed that the rulers of Jamnagar were direct descendants of Lord Krishna. 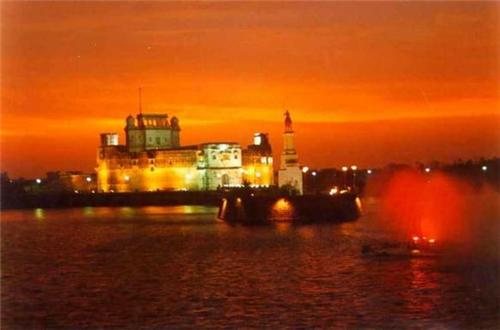 Modern day Jamnagar is an interesting mix of ancient and modern architecture.The centerpiece of old Jamnagar is the Ranmal Lake. Ranmal Lake is one of Jamnagar’s largest water bodies and is one of the most picturesque places within the city.  The lake is home to one of the oldest man-made structures in Jamnagar, the famous Lakhota Palace.

The Lakhota Palace is built on an island in the center of the Ranmal Lake.  Visitors can reach the palace by walking down a stone causeway linking the palace to the north shore of the lake.  Constructed by Jam Ranmalji, the place contains a circular tower built to store rations to help common people during the drought ravaged years from 1834-1846.  The entire place was designed as a fort with the Ranmal Lake serving as a natural moat. The tower and turrets surrounding the structure was also used by soldiers to store their arsenal and was a heavily fortified structure.  Today the structure houses one of the most comprehensive collections of arsenal in the state of Gujarat and is one of Jamnagar’s oldest museums.

The Museum in Lakhota Palace

The fort contains a semi-circular bastion, a pavilion and rooms for the royal guards.  It is in these rooms that the weapon and arsenal collection is based.  The collection comprises among other weapons an exhaustive gun collection.  Apart from an impressive collection of medieval weapons, the museum contains other artifacts from the 9th to the 18th century. The wooden carvings, pottery, sculptures, 10th century copper plates, statues and the skeleton of a whale are some it’s most impressive displays. In addition to the sculptures, the fort is famous for its murals and wall frescoes which depict famous scenes from the legendary wars fought by the Jams in their heydays.

Here's important information about Lakhota Palace and Ranmal Lake, that you can use:

The fort is popular tourist area especially due to the scenic surroundings. The museum hours are from 10:30am-2:00pm and again from 2:30pm-5:00pm.  Entry fees are nominal for Indians and foreign tourists.

The area around Ranmal Lake is extremely popular not only among tourists but local residents as well. The walkaways surrounding the lake are a big draw for fitness enthusiasts while in the evenings the area gets transformed into a cool hangout zone for people of all ages.  During winters Ranmal Lake is a bird watchers paradise with over 75 different species of birds nesting on the lake and its shores.  Most birds are migratory and of rare varieties, hence the lake and the surrounding areas are a top draw for tourists during the winter months.  Visitors to Jamnagar can also soak in the peacefulness of the area by hiring paddle boats for a quick tour of the lake.