Kotha Bastion is one of the most of the most important attractions of Jamnagar city. It is an interesting collection of copper plates, inscriptions and sculptures. 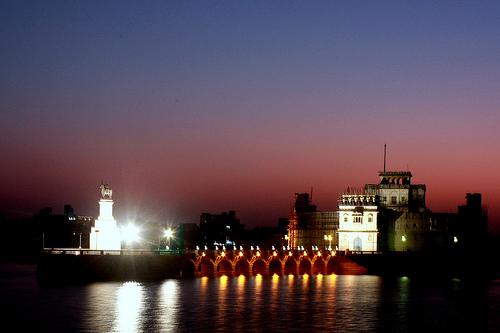 Visitors can reach the palace by walking down a stone causeway linking the palace to the north shore of the lake or by taking a ferry. The entire place is built like a fort with the Ranmal Lake serving as a natural moat. The tower and turrets surrounding the structure was also used by soldiers to store their arsenal and was a heavily fortified structure. Today the structure houses one of the most comprehensive collections of arsenal in the state of Gujarat and is one of Jamnagar’s oldest museums. This place is also referred to as ‘Kotha Bastion’ and is one of the most intriguing places in the state of Gujarat.

The unique feature of Kotha Bastion is a well from which water can be drawn out simply by blowing a hole is considered as one of the marvel of medieval science and engineering. This place is one of the most prized and a must watch for every visitor to the city.  The well was constructed during Jam Ranmalji’s reign to ensure that his subjects had ample drinking water during the severe drought from 1834-1846.  The presence of the well brings forth the brilliance of engineers and scientists during 19th century India and the benevolence of the rulers of the princely states.

In addition to the miraculous well, tourists can visit the museum. The museum contains a comprehensive gun and musket collection.  In addition, there are other artifacts from the 9th to the 18th century. The wooden carvings, pottery, sculptures, 10th century copper plates, statues, inscriptions, photographs and the skeleton of a whale are some it’s most impressive displays. In addition to the sculptures, the fort is famous for its murals and wall frescoes which depict famous scenes from the legendary wars fought by the Jams in their heydays.

The area around Ranmal Lake is extremely popular not only among tourists but local residents as well. The walkaways surrounding the lake are a big draw for fitness enthusiasts and also serve as a hangout zone for people of all ages.  During winters the area transforms into a bird watchers paradise with over 75 different species of birds nesting on the lake and its shores.