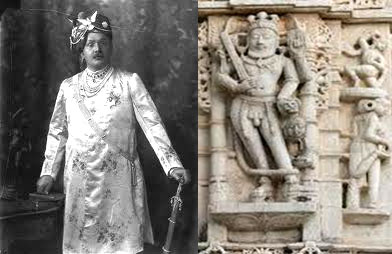 Historians trace the origins of Jamnagar back to the ancient times. As mentioned in Pauranik literature, Lord Krishna established his kingdom at Dwarka located within Jamnagar district. He was succeeded by his great grandson Vajarnabh who built the Dwarka temple. The rulers of Nawanagar the Jams trace their history to the Yadava race i.e the descendants of Lord Krishna.

History says that Jam Lakaji was bestowed 12 villages by the emperor of India, Bahadurshah. However Jam Lakaji was murdered by his cousins before he could assume kingship. Jam Lakaji’s son Jam Rava swore vengeance and vowed to kill his father’s murderers. He killed Hamirji Jadeja who had conspired with Tamachi Deda to kill Jam Lakaji. Hamirji’s sons fled to Delhi to take refuge with the emperor.

They saved the emperor on a hunting trip and were allowed the help of the imperial army to reclaim the kingdom. Jam Rava hearing of the new allegiance started to prepare his troops for battle. It is rumored that nights before the war, the Goddess Ashapura appeared to him in a dream and blessed him. Jam Rava successfully led his troops to battle and was victorious. He killed Tamachi Deda hereby avenging his father’s death and gained control of present day Saurashtra hereby forming his kingdom.

Legends also add, that while out hunting in the lands of present day Jamnagar, Jam Rava was impressed by a brave hare. He decided to build his capital on the land believing that the land would be for the brave and named the capital ‘Nawanagar’.  Over time ‘Nawanagar’ was renamed to Jamnagar after its rulers.

Jam Sree Digvijaysinghji took over the reins post Independence and helped in the integration of the princely states and in the formation of the modern day districts. Jamnagar was formed in 1949 by integrating the former princely states of Nawanagar, Dhrol, Dhrafa, Thana and parts of Jalia Devani.  Under Digvijaysinghji’s guidance, residential plots, industrial zones and the Ayurvedic University were established.  The air force base was also established during this time.

In recent times the year 2008 has been a landmark one for Jamnagar when Indian conglomerate Reliance Industries established the world’s largest oil refinery in the region. This has brought about an unprecedented economic boom for the district the state as a whole.