Jamnagar holds an important place in the state, both in terms of tourism as well as as being a cultural representative of the state. It is contributing well to the economy of the state. One of the factors for its economic growth is its geographical location and conditions. The city is well located and connected with other cities. Blessed with beaches, Jamnagar serves as a great tourist destination and continues to gain popularity. 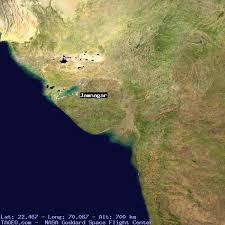 The city has a hot dry climate for most of the year with extreme hot summers during March-May when the temperatures reach an average of 40°C. The winter season begins from October and ends in February with average temperatures around 30°C. June-September is the monsoon with frequent occurrences of tropical storms. The best time to visit Jamnagar is between October and February. Geologists have often debated on the exact origins of Jamanagar but deduce that the district was probably an island or a group of islands with volcanic sites.

The district has uneven but rich variations in its topography.  It consists of hill rages, sand dunes, islands, salt flats, pristine beaches with white and golden sands, dense mangrove forests, coral reefs and natural sanctuaries. Average height of the terrain is 250 feet above sea level. The highest region is the Barda Hills which are 2000 feet above sea level with Mount Venu being the highest peak at 2057 feet approx.

Jamnagar district lacks large perennial rivers.  Most of the rivers are small and are monsoon fed.  The main rivers are namely Vartu, Aji, Und, Venu, Nagmati, Fuljar, Sasoi, Ghee, Rangmati, Sihan, Ruparel and Demi. The district is rich in mangrove forests which are found in abundance in Pirotan Island off the coast.  Pirotan Island is a constellation of 42 small islands rich in mangrove forests and is home to India’s only marine sanctuary.  Since the average annual rainfall is less than 24 inches, the area is not conducive to active agricultural activities. However in some areas efforts to initiate fruit cultivation have been undertaken. The commonly cultivated fruits are mango, coconut, chikoo, papaya and banana.

Jamnagar district is rich in minerals and fossil fuels i.e crude oil.  The district has vast reserves of bauxite which is mined extensively and exported abroad. Gemstones like bauxite calcite, calcareous sand, sea sand, gypsum, Agate, Amethyst, Onyx etc are mined here.  Crude oil is mined extensively by Reliance Industries which has established its refinery in the district, reputed to be the largest in the world.


Fauna in Forests of Jamnagar

With rapid economic development and deforestation, there has been a decline in the local fauna in the Mangrove forests.  However wild animals like jackal, leopard, wolves, blue bull, hyenas, panthers, wild cat, sambhar, spotted deer, black bluck are found in some areas. Despite this downfall, Jamnagar is home to the Khijadia Bird Sanctuary which sees over 250 different species of birds each winter.  Apart from the bird sanctuary, wild-life enthusiasts can visit the dams near Jamnagar i.e Vijarkhi Dam, Ranjit Sagar Dam, Sasoi Dam, Sinhan dam for bird watching.