Jamnagar coastline presents visitors with beautiful beaches during high tide. Along with this there are about 42 islands in the Gulf of Kutch, many of which have fantastic beaches. One can go to different places by the sea altogether, but in Jamnagar a person will get places where they will have privacy which one needs. These places have not yet been commercially developed, so one should go and enjoy it while the beauty of these beaches lasts. 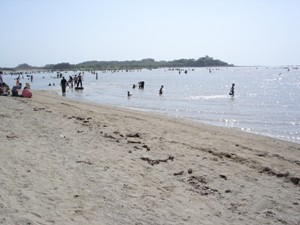 An Overview of Balachadi Beach Jamnagar

The closest beach to Jamnagar is the Balachadi beach, which is located 26 Kilometers from the city. The beach has a golf course and a locally popular resort. The beach also has a history which is not known to all of human compassion. As per Jam Digvijay Singh, his father was Indian delegate to the Imperial War conference. In the year 1942, a ship from Poland escaped from the Germans carrying about 1200 children and 20 women on board. The government of Bombay did not allow them to land but only gave them fuel, food and water. When they reached out coast Jam Digvijay Sing’s father sailed out from Bedi port to take off the children, put them in shelters and in six months he had built a Polish camp at Balachadi, at a personal expense of about 10 lakhs. Not only that, he maintained the camp until the end of the war. The act of that day adds warmth to Indo-Polish relations today.

The Uniqueness of Balachadi Beach Jamnagar

There are many beaches in Jamnagar but this area has an unspoiled coastline which is worth exploring, with due permission from the Conservator of Forest Office. The Balachadi beach is the most popular beach in Jamnagar. Walking along the beach during dusk and dawn is an unforgettable experience. Many people come here on full moon night to experience the beauty of moonlight falling on the sea water.

The Balachadi beach is far away from the maddening crowd of the city. This is one of the serene beaches in the whole of Jamnagar. It is a perfect spot for family get together or a solitary walk as well.  Balachadi beach is not like the overcrowded ones that take you right in the midst of hustle and bustle rather than offering tranquility. The silver of the sand sparkle with the moonlight falling on them and by viewing this, a person can experience magical moments taking over their senses.

How to Reach Balachadi Beach Jamnagar

By Road: There are many state transport as well as private luxury buses that connect Jamnagar from many other cities in Gujarat. If a person is coming from Rajkot, the bus passes through town before reaching the bus station, so one can be asked to let off at Bedi Gate.
By Rail: There are regular trains on the Western Railway with direct connections to Ahmedabad. After that a bus can be taken or a private car or taxi.
By Air: You can board a flight from the airport at about 10 Kilometers from the city. From there you can go for a reasonable auto-rickshaw or taxi ride to Jamnagar city. Various domestic airlines connect Jamnagar to Mumbai.

The Balachadi beach in other words, is one of the most popular and heavily visited beaches in Jamnagar. The beach attracts a lot of public during festivals and public holidays.

Explore more about About Jamnagar